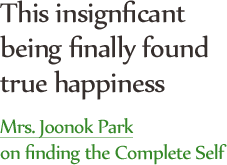 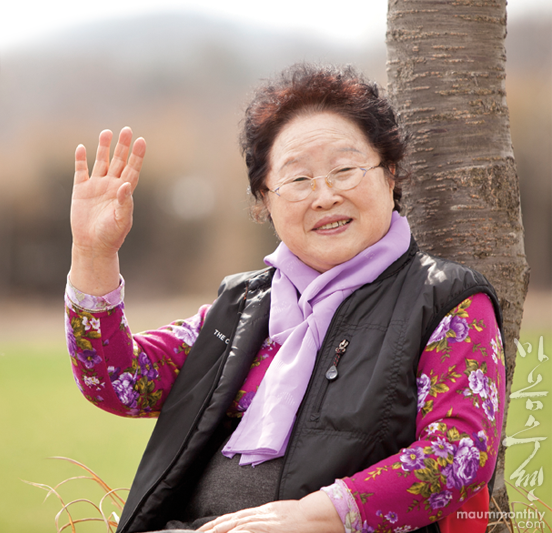 "Many times I wanted to give up and just die. My children were the only reason that I kept living all these years." said Mrs. Joonok Park in a recent interview. The eighty four year old Mrs. Park was married at 16, and had two sons and two daughters. Her life had been a great struggle, with a lot of stress and hardship. So she often asked, "Why are we born into this world and live with so much pain and suffering?" and "Where do we go when we die?" She yearned for the answers to these questions. She finally found the answers when, at the age of 72, she was introduced to Maum Meditation.

Mrs. Park said, "The more I emptied my mind, the lighter and freer I felt. All of my questions were answered and all the heartaches disappeared. I was truly amazed at these great changes. I felt so grateful that I meditated every day." Mrs. Park has reached the final stage of Maum Meditation. She says that when she got rid of her false mind, she could live without worries and concerns. Here, we present her joyful story.

I was born in the city of Uisung in Kyongbook Province. My parents believed that women were not supposed to be educated so I was never able to go to school, no matter how much I wanted to. I helped out my mother with the housekeeping chores at home until I got married at 16.      My daily routine as a married woman was quite demanding. I got up early to prepare breakfast for my family and in-laws and after breakfast I went to work in the rice fields. When I returned home in the evening I did more chores until late at night. In spite of my small physique, I always worked harder so that other people wouldn’t have to work as hard.

All the physical work was very tiring but I could manage pretty well. However, dealing with my husband’s attitudes and behaviors was extremely difficult. My husband believed that people who were born in the upper class did not have to do any physical labor. So he never worked. Not only did he not work, but he also took the money that we women had earned by our hard work. And he would return home after he wasted all of the money just to take more. Nevertheless, I could not make any complaints because he would get angry and throw anything and everything at us.

In the meantime, my children were growing up. I really wanted them to go to school so that they would have a better life than mine. So I started a small embroidery business. I would have some of my neighbors make the products and I would travel to many cities to sell them. Sometimes I felt like I was going to collapse on the road from exhaustion, but I always made it through by sheer determination. Quite often on my selling trips, I suffered humiliation from people’s disrespect and ridicule. It was unbearable, but I had to endure the pain for my children.

All my life I had never expressed my anger towards anyone nor refused any favor asked of me because I always believed that I was an insignificant person. This belief caused a lot of unnecessary stress in my life. I often wondered about the reason why I was born, and the reasons why I had to suffer so much in life.

So I constantly sought the "Truth" (the answers). 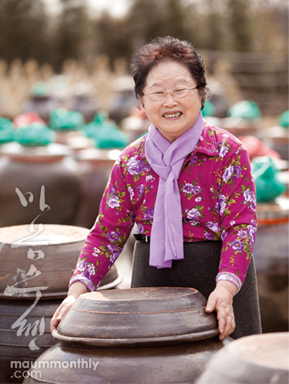 During the first level, I was told to discard my whole life memories that were stored as pictures in my mind. I meditated 14 hours because I was so happy and excited that I could throw away myself and my life, which I thought were disgusting. I was especially happy about discarding myself (my false-self) because many times I had contemplated on ending my life and disappearing from this world. I progressed steadily and one day, during meditation, I completely disappeared. Then I realized that I never existed, and that the Universe was me. My whole life was just a dream. It was so amazing that I could realize this truth.

At every level, I meditated until I completely disappeared. It is hard for me to describe this experience since I am uneducated. During the third level, my consciousness expanded suddenly and enclosed the whole universe within me. I said to myself "Aha! The universe is within me!" I was in total bliss. In another session, I was instructed to try, using my mind, to go up as high as I could, and go down as far as I could in the universe. Then I realized that the Universe is infinite and has no boundaries.

I continued to meditate and one day, I became one with the Universe and I disappeared without a trace. At that moment, I realized that ‘I’ would be reborn as the body and mind of the Universe and live forever. "Wow!" This was unbelievable. I could never express well enough the feeling I had experienced at that moment. I was so overwhelmed by gratitude and I could not stop crying.

I now believe that I am responsible for everything that happens in my life. I realized that it was my karma that had brought, out of all the men in the world, my husband to me. And it was my own fault that I had so much anger and hatred towards him.

Also the attachment to my children had caused much suffering and hardship in my life. Many times I sincerely apologized to my children for putting the blame on them.

On rare occasions, such as my children’s graduations, marriages, and childbirth their lives had brought happiness to me; but that happiness always turned into concerns and worries. Now, thanks to this meditation, having let go of all attachments to my children, I am free of worries and concerns and feel relieved.

And I constantly feel happiness and gratitude and have a smile on my face. It is only natural that I feel happy all the time now that I live in the everlasting world as a totally free and enlightened being.

I can tell you that this meditation takes you to a place no words can describe. You will only know when you experience it yourself. 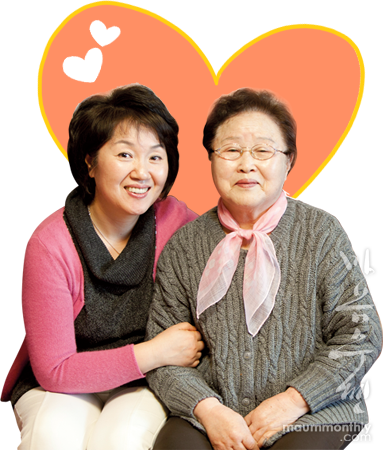 “My mother always used to worry and frown a lot, but after Maum Meditation she is always comfortable and smiling. I am very grateful that she has become so happy.”