Life is Always a Spring Day

One afternoon on a sunny spring day, he was playing basketball with the neighborhood kids.  His concentration as he sweat in the sun caught my eye.

Once again, he was absorbed in basketball as he waited for me to get off from work.  I was four years into my life as a young working woman; he was waiting for his first placement as a teacher.  Both of us were past the worries our peers were going through, and our present and future together looked to be a happy one.

Six months had passed since we broke up and got back together.  We saw each other nearly every day.  After work we strolled along the most beautiful street and visited famous pubs.  I was attracted to his comprehensive knowledge and progressive social consciousness.  He said I had adorably cute expressions.  He always listened to what I had to say and liked the fact we could communicate on the same level, despite my being five years younger.  Of course there were days we fought, but the periods of distance didn’t last long, and our relationship grew to be stronger than before the fight.

That year’s monsoon was particularly long and there was a lot of rain.  Every day came with bad weather. The waiting room of the Intensive Care Unit was full of tired, expressionless people with unkempt hair.  I was there, along with his mother, father, younger sister, all of whom I had just met for the first time.  In the next room, he was relying on a respirator, battling death.  No, rather, he was heading towards death.

His illness came all too suddenly.  On the hottest day of the year, he came to my house.  He said he had a fever.  I figured it was because of the heat.  A bit later, he said he was cold.  I gave him a warm blanket.  A few days later, he was rushed away in an ambulance.  After tests in the morning, I thought he would leave the hospital all better.

Two days after he was admitted to the hospital, I went to see him.  He was diagnosed with malignant lymphoma. He was unconscious.  However whenever treatment to remove something from his neck was performed, he would writhe in pain.  The doctors said that even if he recovered, he would be handicapped.  As the days passed, the doctors tried to persuade us to abandon hope.  After I returned home, I got a phone call saying his situation was serious.  Then another similar phone call came, and as I drove up to the hospital I found out he had passed away.

Maybe it was because of the absence of all the cumbersome machines, but he appeared peaceful as he lay there in the hospital bed.  His chest still seemed warm.  Could it be he was still alive…

After he passed away, the world was no longer like a bright spring day.  I became the cynical self I had been before I met him.  I comforted myself by telling myself I was never interested in love, that I didn’t need love.  I resented him.  I went on trips by myself and immersed myself in movies and music.  I wanted to pour out my feelings for him from my heart.  At the same time, I didn’t want to talk to anybody about him.

I ate, worked, and lived day to day in the same way, but every cell in my body felt full of sadness.  I felt like crying whenever someone provoked me in the slightest.

Then a colleague recommended Maum Meditation to me.  As I mediated, I threw away the ‘me’ that was holding onto him.  I threw away the ‘me’ that lived in the memories of the short time spent with him.  The places we went to together, the memory of him playing basketball, scattering his ashes along a riverbank, me as I cried and laughed, I threw it all away with my mind.

I thought I had truly loved him, but it turned out that wasn’t so.  I had always received, wished for the void in me to be filled, wanted everyday to be fun.  I was ashamed to realize the tears I had shed had actually been for myself, for me now that I lacked those things.  I was wrong, I am sorry…. as I meditated I apologized with all of my heart.

It’s been nine years since he passed away.  Now I can recall him with calmness.  Now that I know where people come from and where they go, I know he has shed his hurting body and is in a good place. Now I live earnestly and in the present.  Always. 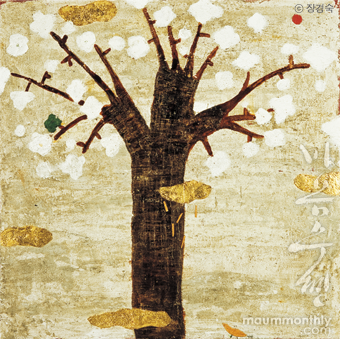