A model student and a bully met.

Joe Young Kim and Joong Won Park, so different are their personalities, hobbies, interests, views of love and relationships that their ways of thinking and their values stand at opposite poles. There was not any similarity between the two. However, through their journey of subtracting their minds, they gradually came to know each other. They found ways they were similar, and built a close friendship, like brothers. Without ‘Maum Meditation’ such would never have been possible.

Here is a conversation they had about how two people at opposite ends of the world came to be one.

“I was a studying robot.” “I belonged to a motorcycle gang.”

Kim When I was in school, studying was the only thing I did. I studied every night, and even on Sundays.

So my nickname became the studying robot.

Park You did? I was into motorcycling when I was in ninth and tenth grade.

So I did not go to school much, but rather hung out with other kids in the motorcycle gang. My parents were busy so they rarely stayed at home. So my friends came to my home often. When they ran away from home, they all came to my home. It was a house for runaway kids. Haha!

Kim I was afraid when I saw people like you at school. It was difficult to become close to them. (He smiles.)

Park Well, you know, we didn’t mess with model kids. They are strange beings, so different from us.

Kim Yeah, you are right. By the way, did you have any troubles with your friends?

Park I think I didn’t care about other people at all. I cared only about how noble I was.

Proud kids are like that, you know. No matter what other people said to me, I would think, “You can live your life that way. I am noble and will live my own way.”

Kim Really? Then it is surprising you practiced Maum Meditation.

ParkI went to Maum Meditation Youth Camp when I was in the ninth grade.

I couldn’t continue meditation because I have to study for college and serve the army. Then one day my mom asked me to do Maum Meditation, saying that it was her only request. It was the first time my mom had asked me something so earnestly. She always just accepted whatever I did. Even when I smoked at home, she just changed the ashtray without a word. So I could not refuse her request. That was after I had just finished my service in the army. I was all prepared to have great fun at last, and it was torture to sit and meditate. I thought, “What am I doing. I should be at the club right now.” (He smiles.) That was when we first met.

Kim You’re right. I was in my first year in medical school. My first meditation practice was when I was a junior in high school.

I thought that if I put all my time in studying I would get the highest grade in my class, but I could never be the top of my class. It seemed like one of my classmates was playing all the time, and got the best grades. I was irritated, and a sense of inferiority bothered me. I thought, “This is not even a life,” and I was depressed. Around that time my dad started Maum Meditation and I was able to start as well.

Park So when did you become a model student?

Kim When I was in the 5th grade in elementary school I was left out of everything by my classmates.

After that, it was heartbreaking when my friends didn’t like me. I think I tried to be nice to everyone. And then, when I did well in my math class, they paid attention to me, so I thought, ‘this is my shield.’

Park I am the only son in my family, so they overindulged me when I was young.

But when I entered elementary school, the school teachers did not treat me the same way my family did. I guess that hurt me. I started to build up pride, and as early as the fifth or sixth grade I made my own gang. Ha! That is what a sense of inferiority is, the thought that I am vulnerable but the world hurts me. In reality, it was I who took in that mind. Starting from the ninth grade, I met a group of friends and begin to fill in the emptiness my sense of inferiority made. I blackmailed kids and acted like a gangster. I was doing what you did through studying.

Kim Right. It was all about inferiority.

I feel other people’s mind naturally and can understand them

Kim Since now I could see that mind that I had, I had to get rid of that mind.

Then I realized the mind was gone; it really was no longer there and only the universe mind was left, and I could really be at ease. Often I pretended to be so kind, but after I threw that away, I could deal with my friends very easily. I started not talking so seriously, and I could listen to what other people said.

Park As we throw away such minds like pride or inferiority, our mind grows larger to the extent we throw away.

Quite naturally I no longer offend people, and become more conscious of other people. I used to dump my cigarette butts anywhere, but these days I look for trashcans. When I talk to people too, I can feel their mind naturally and I don’t say hurtful things anymore.

KimI had a classmate whom I could not understand. He drew so much attention in a strange way.

But as I looked back on his behavior during meditation, I realized that it was his own way to become close to people; just like I tried to be acknowledged by my studiousness. He was the same as me, and there was nothing great about me that I should judge him. After all, it was I who was wrong. Ever since then I get along well with him.

Park When I get rid of my prejudice of someone first, then the person is at ease in his treatment of me as well.

Kim I agree. You were scary when I first saw you with your eyes glaring. (He smiles.)

But you came up and talked to me first. At some point I began to feel very comfortable around you and to like you.

Park When I started the meditation I was too busy throwing away my mind, and didn’t have a chance to look around.

Then I saw you meditating so diligently, and thought I should work hard like you.

Kim I learned a lot watching you being so confident in whatever you do and being flexible dealing with everything all the time.

I’m not good at those things.

Park When we practice Maum Meditation, we break down the wall we built around us, and everyone can get closer to each other.

Also, at school I find myself taking the lead. My GPA used to be just 1.3, but at some point I received a full scholarship and my grade was the highest in my department; all within the six months I practiced Maum Meditation! I made such a dramatic change. You did too, right? I was surprised when you danced at the Maum Meditation University Club. You are a great dancer.

Kim Am I? (He smiles) Actually, I was very jealous of those kids at school who got up on the stage,

singing and dancing so well. I thought, ‘I want to be up there, but I won’t do as well as they are doing. I should just keep studying’; and so I just stood there as shy as a kitten in a strange room. But once I realized that was also just a frame which locked me in, I tried to escape from the frame.

From a 1.3 GPA to a full scholarship student, from a kitten in a strange room to an expert dancer

Park When I do things to break out of my frame, the process itself is fun regardless of the result.

As I began doing the meditation, I also began to regret the way I lived. I began to study, and maybe because I no longer had distracting thoughts I could easily understand things in an academic sense.

Kim I agree. I, too, am becoming more and more certain about studying oriental medicine.

Oriental medicine deals with the fundamental principles of the body and mind, and yin and yang; and we understand those things naturally as we do our meditations.

Park If you do Maum Meditation, engineering is a piece of cake. It just becomes so easy.

In a thick text book, there is only one page to memorize. Principles of engineering are the principles of the world. When you hit something, it breaks and when you rub something, it gets hot. That’s all. (He smiles.) Before, I would attempt to read the original text, but after reading two or three pages I would give up. But now, I can grasp what is the most important thing in the book and memorize the formula. Then I am able to solve two or three questions in the exercise. Once I make the questions mine, I skim through the book from the beginning, then I can understand everything. It’s like I become one with the book. (He smiles.)

Kim That’s incredible. How much did your grade improved?

Park After I did the meditation, my GPA was never lower than 4.3. (The full GPA score for universities in Korea is 4.3 or 4.5)

Kim Isn’t that almost all A+? Wow! As you said you become one with the book,

How great it will be if we become one with everyone. When I meditate I see that all of us, my friends and I came from the universe, but why can we not live in peace but fight instead? There are so many religions, and divisions among political parties. I wonder why there are so many judgments.

Park Just like we did, everyone should start by throwing away their mind.

We know when we throw them away, that we are one from the beginning. If people can get out of their own perspective and live as the universe mind, then there will be no division among people and everyone can live well. I think that subtraction is the only way.

Kim You are right. That is the key. Subtraction!! 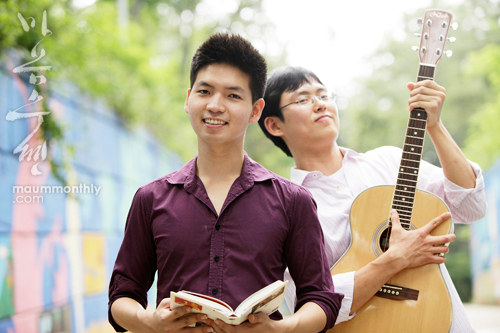