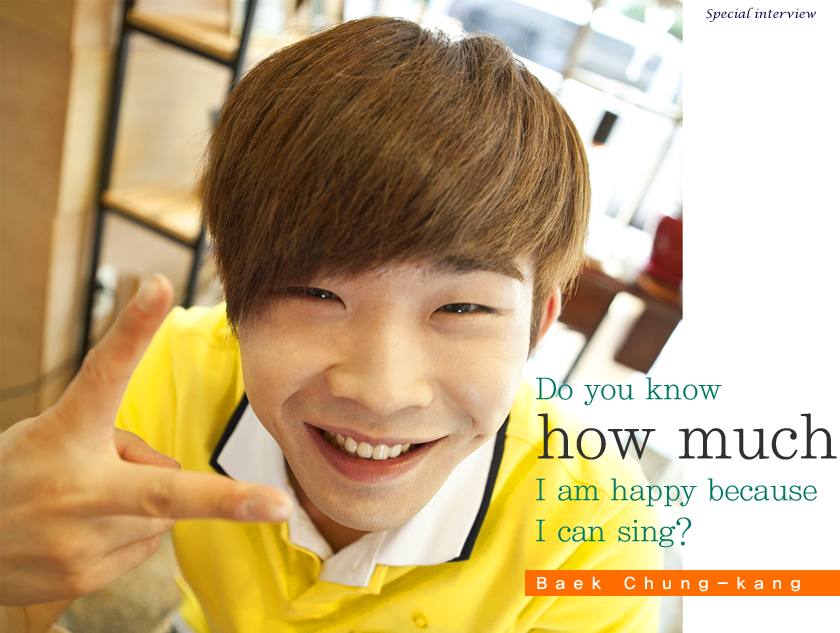 On last November, there was an audition TV program named MBC ‘Birth of Great Star.’

Many competitors from all around the world came together to compete in singing.

Baek Chung-kang(23) dreamed to become a singer from since he was a young boy. He didn’t receive much attention in the beginning;

however he has a special singing ability. Ordinary appearance, covering eyes with his hair and looking shy…,

But Baek Chung-kang tried to mend all his weak points. He became the final winner after 7 month. Nobody expected his reversal,

but his win also could be the hope for the people who are trying their best to reach their dream.

We met Baek Chung-kang who has his new start as a singer.    Article by Choi Chang-won, Photo by Hong Sung-hoon 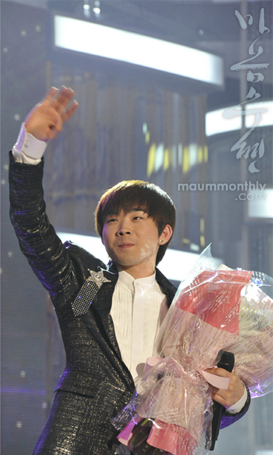 I guess you had many happy feelings but were also afraid when you won.

First of all, I was happy because I can now do the things I want. Some people worried about me that I might be such a peacock, but I think just now this is the time to start. I’m just a new singer however I won the audition. Being a singer or not, it depends on me how to do from now. If one day I can be a really great star, I will think that moment is also the time to start again. Just doing my best is the best thing I can do.

As I know, many music companies contacted you.

But you chose the ‘Boohwal Entertainment’.

It’s hard to speak the names who contacted me but all of the big music companies contacted me. Honestly I concerned those companies at first. You know, I like dancing. I worried such as "Boohwal Entertainment has no relation with dance, what can I do?" But I concerned humanity more than singing. Whatever you become, the most important is being a good person. Finally I decided ‘Boohwal Entertainment’ because I can learn humanity from Kim Tae-won (Baek Chung-kang’s mentor at the audition program) and he is a good man to lead me so far. (Laugh)

You donated a big amount of your prize money.

I hope people think it’s not very big thing. I think it’s a matter of course. I thought I got many loves from Koreans, so I would like to help the poor children in Korea."

Baek Chung-kang was a boy who liked to sing and dance in front of others when he was a young boy.

He was alone since his parents went to Korea for making money when he was 9 years old.

He said, he cried when he felt lonely but he was happy when he sang songs.

Many with these times made him sing with all of his heart and get consideration for others.

Baek Chung-kang who dreamed to become a singer began to learn music in earnest when he entered the music institute after he graduated his elementary school. He liked Rock star ‘Kim Kyung-ho’ and wanted to be a rocker. But one day he had another shock after knowing dance group named ‘HOT’. "How can they sing with those dances?" He practiced dancing and singing over 10 hours a day. He made money at clubs as a singer and attended many auditions. He won many award: Yanji music contest, Yanji Teenager audition… At all the auditions where he attended, he won. But the reality of being singer told a different story. China is too big to promote himself just as a winner of the local contests, especially as a minority race in China. When he was starting to lose his confidence, he knew about MBC ‘Birth of Great Star’ in China. It was only one hope for the guy who couldn’t find the right way becoming a star.

It took almost 1 and half day to Qingdao where the audition was held by train. His mother said "How can you go to Korea? There are so many people who have good singing abilities." Then she tried to stop attending the audition. But finally he persuaded his mother and he staked his all on the audition, thinking this was his last chance. 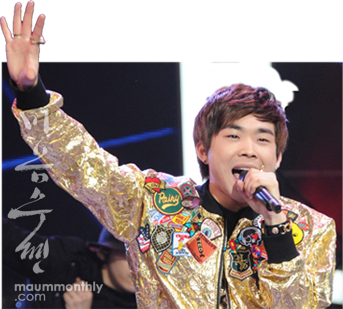 At the audition day, he was valued highly as a singer with comments such as "We met one of the people who can sing very easily." But unclear pronunciation because of nasal sound, and imitating other singers were a big problem for him. In the end, the result of his first audition in …China… was passing.

"I’m happy. I feel so great. Mother and father, I will do my best and become a good singer. I love you."

Just only one thing he could do at his first step to his dream, he cried. Then he came to …Korea… He competed with 100 people who passed the first audition. Finally he was chosen as a mentee of Kim Tae-won. Finally, there was no mentor who wanted Baek Chung-kang as their mentee. At that time, Kim Tae-won raised his hand and said "I will choose him." He realized Baek Chung-kang’s strong passion and ability for singing.

Baek Chung-kang nurtured his strengths after being Kim Tae-won’s mentee. Every step of the competition, his nasal sound and unstable voice was his weak points, but he made efforts day and night to correct them.

We could know how hard he was working to make his dream come true after watching his perfect performance at dancing and singing the idol’s song. His mournful voice touched people. His inner beauty came out and he got many fans.

After the broadcasting, you got more fans.

As I knew, after the first broadcasting about the audition in …China…, my fan cafe appeared on the community website named, "Daum". There was only David’s fan cafe. Honestly I envied him at that time. Then there was my fan cafe, too. At first I couldn’t believe it. And I appreciated them to like me. Well, I was so happy to have fan cafe. "My dear fans, Thank you so much for supporting me. I really appreciate you. I’ll do my best not to make you to shame on me."(Laugh)

I think it would make you nervous if people point your weak points such as nasal sound or imitation singing in front of you.

Actually, at first time I was very embarrassed and surprised. But I was begging to understand it and tried to correct it. All their advice are for me and to make me better. Especially, the advice for the nasal sound was quite hard. I have had the nasal sound since birth. It is an inherited trait. But I changed my mind and practiced a lot to change. Then it worked. Even now, I try to remember their advices on the stage. Such as mentor, Lee Eun-mi who said "The background music and his voice didn’t match. Try to make harmony with the music." And she told me the tune was not clear. I checked my performance by myself backstage. And they were right. The tune was getting lower while I was singing. So, I also practiced it. It’s getting better. And mentor Shin Seung-hoon said "Show the gesture clearly. If it’s not impossible, it’s better not to do the gesture." I will always remember it.

You remembered all words mentor told you.

Especially you and mentor Kim Tae-won have so special relationship. 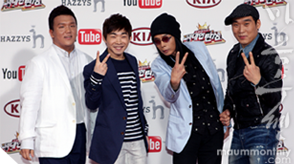 "Baek Chung-kang and I made a promise in our mind to become a singer who can give hope and courage to people. I hope he keeps our promise." Kim Tae-won spoke after Baek Chung-kang won at the audition. Frankly speaking, the fact that the Korean-Chinese who has nothing in Korea won the audition already gave people many hope. While the audition, the people in Yanji were so excited. The young boy who has generated buzz such as ‘Angkka'(Yanji dialect) became a pride of Korean-Chinese in Yanji and a bridge between Koreans and Korean-Chinese.

As we know, you became a role model in Yanji. What do you want to say to your friends in China

and the participants who will apply for MBC ‘Birth of Great Star’ season 2?

I hope they never lose their dream even if it’s hard to do. If you do your best for your dream come true, you can reach to your dream. This is also for me. And the MBC ‘Birth of Great Star’ season 2 will start soon, I know you will be very nervous but I hope you overcome it and go step by step. Please think this is your last stage and do your best as much as you can. I also did like that.

What is music really about for you?

For me, music is a ‘WAY’. The way I choose, and the way I have to go. That is music. Also I want to cheer up people who never lose their dreams through my music.

These days, Baek Chung-kang started his life as a singer singing a main theme of MBC drama ‘Gyebaek’ O.S.T. Baek Chung-kang said he knows how precious this moment is because he has experienced frustration a lot. A young guy who just came here only with a passion for singing, he will make his own world as a singer ‘Baek Chung-kang’. And he will show how the singer who never forgets his original intention is.

We imagined his future after having interview with him. At the Top Star Baek Chung-kang’s concert, he is on the stage with his particular sweet smile, then he will ask,

"Everyone, do you know that I was the winner of MBC ‘Birth of Great Star?" 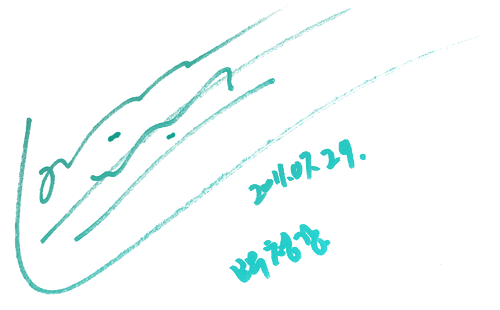 Baek Chung-kang was born in 1989 in Yanji. He dreamed to become a singer and began to learn music in earnest when he entered the music institute after he graduated his elementary school. He practiced dancing and singing over 10 hours a day. He won many award: Yanji music contest, Yanji Teenager audition… With his special singing ability, he became the final winner after 7 months of competing at MBC audition program MBC ‘Birth of Great Star’.