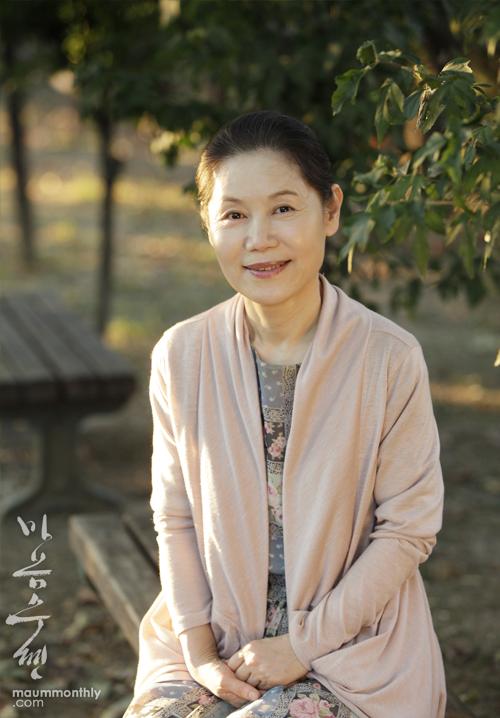 I married at the age of 25 and we left for Holland, the first assignment for my husband. Of course, my marriage had to be the best. Since I was perfect, I wanted my husband and children to be perfect also. Because my children must be the best, I spent my life during my thirties being an extremely frantic mother. In my forties, I tried hard to have my own career. Psychological counselor/therapist, Yoga instructor… Just as I aimed for, the reputation and money came along.

I believed if I had the reputation and money I had dreamed for, I would be happy. However, the sense of success was so temporary, only for that moment; I was not happy. All around me, there were always people much greater than me.

My husband, who didn’t seem to have any worries, also had strong desires for success and money. That mind had left him with a feeling of being inadequate, so he naturally felt small in front of people who had more than he had. In order to fill the emptiness of inadequacy we had to make what was around us the best. Even when our children did everything well, if they made one mistake we scolded them over that.

Every single moment, I had to become better and higher, and I felt lacking with what we already had. In this mind, happiness never existed.

I was always in the pursuit of happiness from outside of myself, so it was the natural consequence. When I went abroad, I would experience my tightly held sentiments crumbling apart. I also had many experiences wherin I naturally came to respect the subtle and mystic qualities of nature. When I would look up to the sky, tears tumbled down for no reason. I used to cry a lot, deep in the quiet forests.

Why did I come to this world and live like this? Who I am, where did I come from and where do I go? Why I had always been comparing, greedy, envious and jealous to people better than me… I felt too exhausted, I thought that even though I am born again tens of billions of times again I would live just like this, holding those minds.

It was the end of 2003. It hadn’t been that long since I had come back from Belgium after my husband’s work was completed there. My friend gave me a book [World Beyond World] as a present. What would be the ‘world beyond world’? I read it all night long, and read it again and again. I might have read it 10 times. Then, I decided to try Maum Meditation. I cried a lot while meditating.

Although my husband had done everything for me, I had ignored him and the people around me. With my strong pride, which meant I never wanted to lose to anyone, I tried to do everything for my own sake. Actually, I myself was inferiority itself. I had been trying so hard to hide it.

As I started to let everything go, I changed little by little. I was the perfectionist, who had to logically quibble over whether every little detail was right or wrong. But I gradually mellowed.

My husband started the meditation too. After a week of Maum Meditation, my husband said with comfortable face, “nothing bothers me because I let everything go from my mind. After I subtracted everything, I truly had regrets about my life that I have lost by pursuing false things.

As my husband and I threw out the mind, we came to know what is living truly without regrets and what is living truly happily. With inferiority, superiority and desires to become the best, you cannot help but live with regrets every moment; because this is the life that is only for me and the futile dream which soon disappears.

The life truly without regrets is one of being without any pieces of ‘me’. You only have to become the mind of sky, which always stays the same, even over foreign lands. Has the sky ever blamed or envied anyone? Or, has it ever made discernments whether something is right or wrong, or this or that? When you live with nature’s mind, hoping for others to be happy and helping them from your heart, with no worries or possessions, then no regrets will be left behind.

When I counseled others before, I did it with superiority. I pretended to be friendly, but deep in my mind I wanted to reign over them with a sense of superiority that even I didn’t recognize. However, after I threw out myself and emptied out the mind, I could just become one with them by being truly peaceful and calm. Before I started Maum Meditation I believed people requested the counseling mostly because they were, for various reasons, unfortunate or unhappy. However, I now know that their mind was so full that no more breakthroughs were possible because of their desires to possess more; so I help them to realize this. They were actually who I was in the past.

As I looked back at my life, I realized that I had made up so many trivial must-not-dos; not having suppers, not taking off socks anywhere, not squeezing toothpaste in just any way…

From those little matters to big matters, I lived building up my own boundaries perfectly. My husband says that when he sees people that are like how he was in the past, he feels sorry for them. The biggest regret that anyone can have is when they come to know that they have wasted their precious life time on chasing what is false. Nobody would repent if they have lived pursuing what’s true and genuine, treating and loving others with no expectations. Some of you might say everyone knows this and anyone can talk about it. We used to think the same as you.

However, we now truly know that by emptying out the mind you can live true life, becoming one with the sky, living every day with no regrets. That’s why I am truly happy today, and every day.