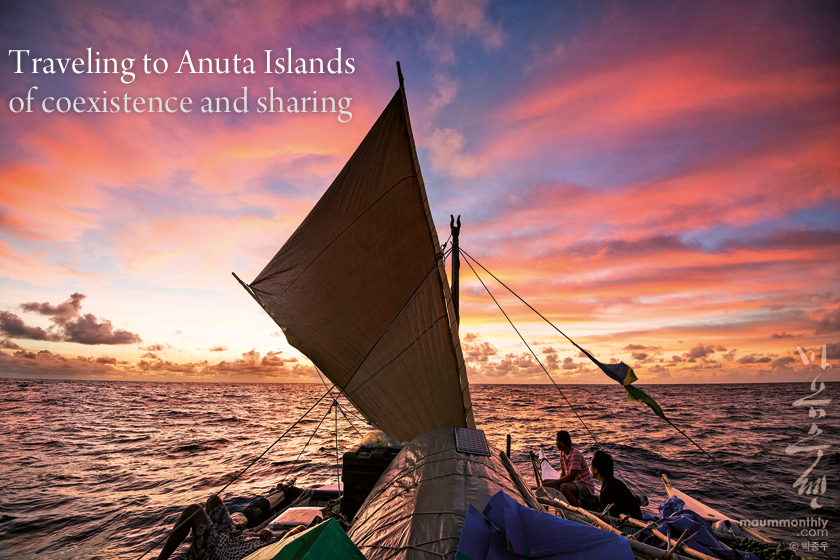 Last fall, to film documentary <Last of the Empire>,

I got into a sailboat toward Anuta Island.

I was traveling to find an alternative to materialism, having arrived at its limitation due

to human greed and infinite competition.

But traveling toward the island wasn’t easy.

Using stars as a guide for four days, we arrived

at Anuta Island after a long voyage.

Written and photo by Park Jong-woo 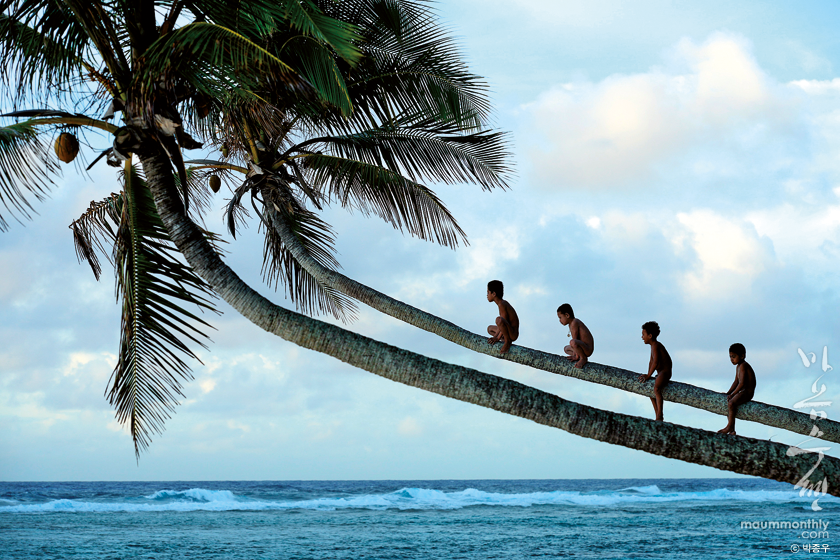 As soon as we arrived, children came to greet us. White sandy beach, jade green sea, palm trees that covered the island – such gift of nature made us think of a paradise.

But this wasn’t a land of plenty. The small island the size of 600 meters or so was mostly hills and surrounded by rocks which was barren; and unable to have boats to come in. To them, the ocean was the base of their lives and sometimes, fearful war zone. Due to the natural disasters or hurricanes, family members can be lost; also it’s not easy to go fishing due to the changing weather.

But amazingly, singing and dancing in the village continues. Innocent children playing naked. Joy and rhythm learned since childhood rings all over the island. 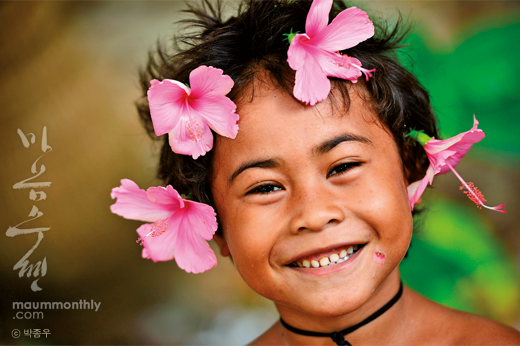 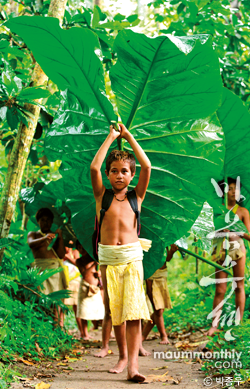 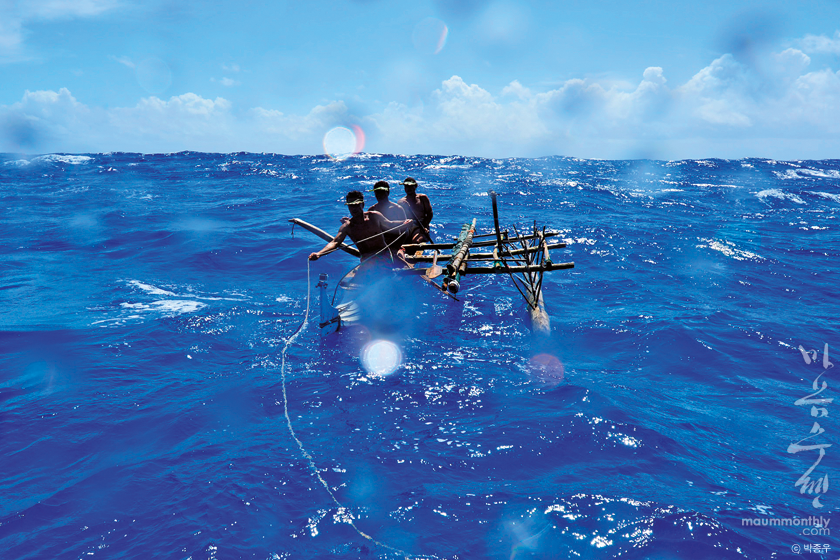 People in Anuta Island solve everything together. It’s natural to help bring up children who lost their parents; every other house has someone who adapted a child. When a child is born, until the mother is able to, people take turns helping. If unable to fish, whatever fish was caught is shared among 24 houses equally. Anuta Islanders call this ‘aropa.’ It means ‘love, compassion, sympathy’; it is a value of ‘sharing and coexistence’ which they feel is the most important.

Through ‘aropa’ they learn the wisdom to live helping one another. About 300 years ago, ‘aropa’ became the root of life philosophy. At that time, in order to monopolize limited resources, many people fought for power and died, leaving only four people alive and at a danger of extinction. The enlightenment that people must help each other spread as ‘aropa’; a rule to live with each other.

About the time all names of 280 islanders were memorized, after a month’s filming, we left the island. Before the boat left, about a half of the islanders came to the beach and cried. And sang us a song of goodbye. Anuta informed us that how human beings lived originally for many years was different from how we lived today in frontlines of materialism. I wished that the word of hope ‘aropa’ is spread to our more and more difficult reality. 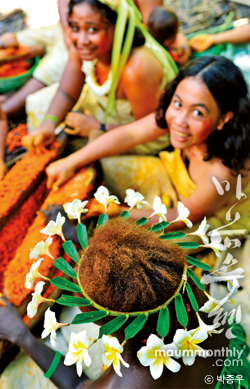 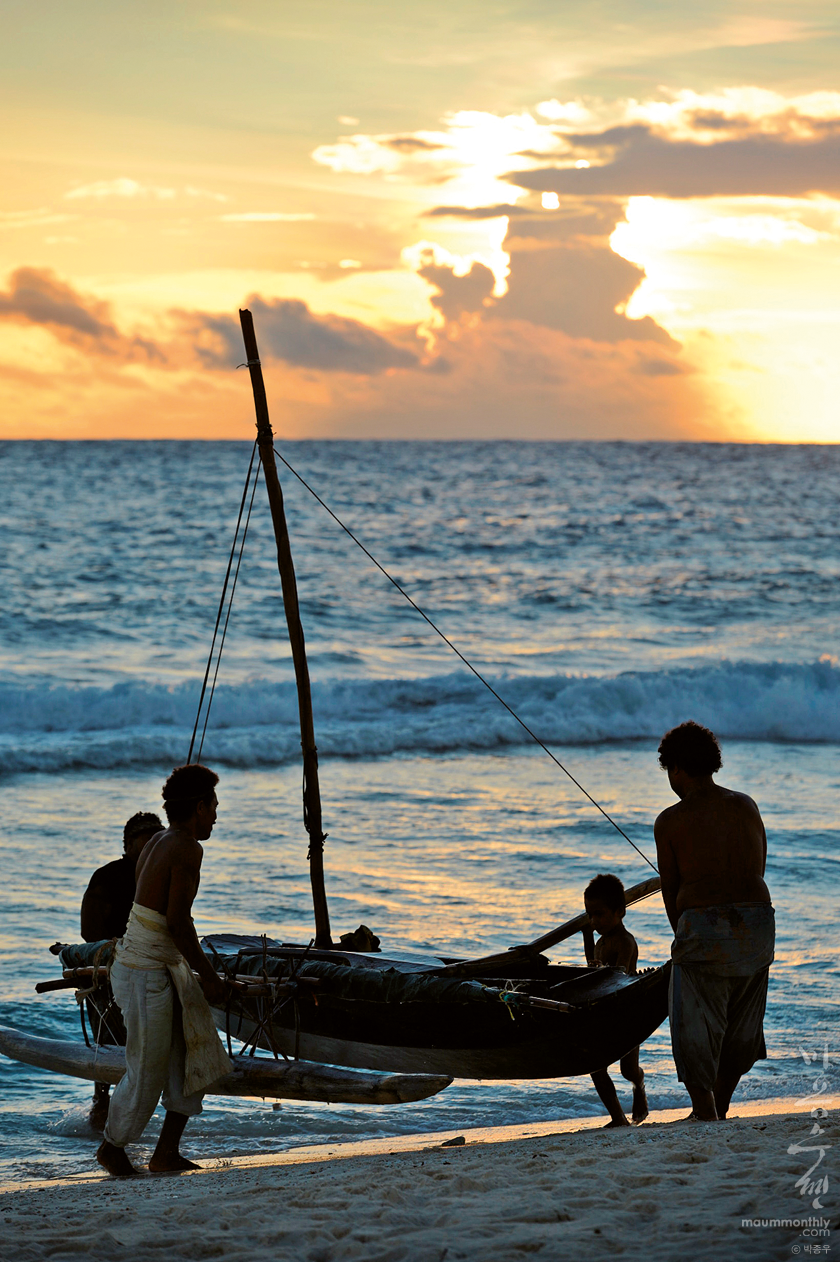 Park Jong-woo, a documentary photographer, graduated from Hankook Uni. of Foreign Studies and also completed graduate degree at Joong-ang Uni. He was a photojournalist with Hankook Ilbo and became a documentarist to record minority cultural groups all over the world. His major works include documentary <The Record of 1000 Days of Chamagodo> <Sa-hwang-ji-ro> and <Last of the Empire>.