There is a wall between people? No! The wall was never there.

I started business after I graduated college.

I was outgoing and people said I was meant to do business.

I was frustrated and tired, and at last, I even began to dislike meeting people.

Why don’t they understand me? Why are they so selfish?

I blamed the way people treat me, but in fact, that was the way I behave.

So I decided to knock down the wall I build between others and me brick by brick. 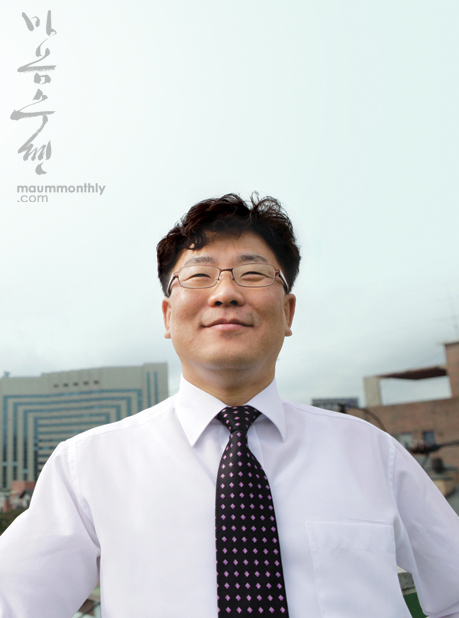 where did my wall

Around the time my life began to fall apart, my senior alumnus I respected died of liver cancer. Two days before he passed away, he called me and gave me an advice.

“As I look back on my life of 44 years, it feels like a dream. Money, work and such are important, but do not forget to reflect on yourself.”

I very much liked him as a role model, and it was a great shock to lose him so sudden. The sudden lost kept me from doing anything, even my work I valued so much. So I put everything aside and head to Maum Meditation Center. There, I could found the reason of my struggle, the fortified wall which I built against the world. I was 35 years old.

★ I saw people as means of achieving my goals.

I looked back on the way I treated people. I regarded everyone as a tool to achieve my goal. I had approached people around me as if I was a good person, but in fact, it was to fill my selfishness deep inside. I never cared for others truly, nor loved them with my whole heart.

I was eager to earn a lot of money. I worked as an employee but also had my own business. I even invested in stocks. I was greedy and wanted to do so many things. However, my stock crashed and my business did not go well. Soon I was in a huge debt. A friend whom I trusted betrayed me, but that friend was a reflection of me. I also could betray someone as he did because money was more important than people. As I look back, I sought for money because of my feeling of inferiority and guilt. Money was everything to me, and so I never could have a true relationship with others.

★ Everything was other people’s fault

When things did not turn out the way I wanted, I blamed others. I blamed the circumstance, my teammates, or my clients. Everything but me was to blame. I am working so diligently, but why do they not follow the way I want? All I did was complaining. I should be respected the most. Only I am right. I must stand above everyone else. Only me, me, me. That was how I built my wall.

I looked at my life as if I watched a soap opera. I could see how I who was the main character treated others in every incident. How could that kid called Min Gu Huh could behave like that? I was the worst person in the world. I was proud, greedy, stubborn and selfish, and I only cared for myself. I burst into tears. I could not lift my head in front of those whom I hurt.

One by one, I threw away money, selfishness and blame on others that filled my mind. As I continue on, at a certain point, a great appreciation to those who stood by me arouse, and I felt so refreshed as if a gust of wind went through my body. I knew the wall had fallen down. I found the answer to a good life.

The method to knock down the wall within me is the true self-reflection and sincere repentance.

There never was a wall

There never was a wall among people from the beginning. All of us are one existence from one origin. I realized a wall was what I created. No one is better or worse. Naturally, I started to respect others. I moved to a new company in 2006. My mindset as a salesman changed, and my reputation also improved.

I did not hold performance utmost. I thought myself as a ‘helper’. Before, when I met clients I was busy talking what I need to talk, but now I ask first if there is anything I can help or any inconvenience, and listen to my clients. Even though there is no immediate profit, I did my best to help others. I did not ask for too much, and left the result to heaven. It was I who felt invigorated as I work for others. As I appreciate people, I began to enjoy meeting people, and we could trust each other. As a result people came to me first, and I had higher chance to succeed a deal. When I asked why they chose me, they say “I felt honesty. I thought I would not regret if I trusted you.” I became so-called ‘business king’ which I had yearned to be, and I also could pay my debt.

You cannot approach other people if you do not knock down your wall. If you think ‘that person must be going through the same hardship as I am’, then you want to help others and can approach them. When you are in conflict with someone, try to look at the situation objectively instead of your subjective point of view. If you cannot understand, ask. Then you can resolve the misunderstanding, and this can be a chance to understand each other better. People say a sales team and a technical team in every company are like water and oil. It is often said that a salesman feeds three workers of the company, and so salesmen are proud of their position. So, when they ask for help, other departments are not willing to help them.

So I tell my teammates. First, we should be honest about our situation, and lower ourselves. “I really don’t understand this part. I feel embarrassed to hold this job even thought I don’t understand this. So please help me. Then we learn at least one more thing, and how great it would be if we can succeed one more deal as a result.” Let’s approach each other with honesty.

In fact, as I open myself and sincerely ask for help, the other person opened his mind too. Thanks to this mindset, everyone in my company and departments work in harmony. If I first put down my wall and approach others, then their walls also fall down. 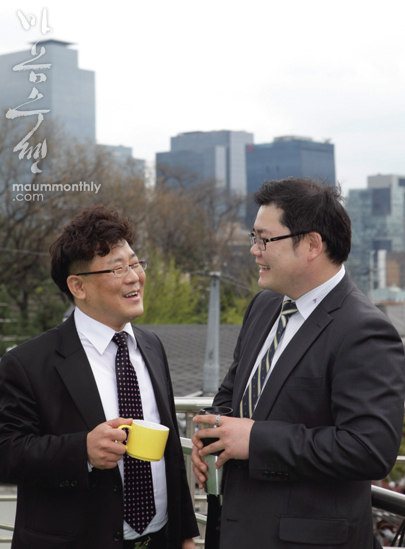 “Mr. Huh in daily life is a comedian,

and in a workplace is like an elder brother.”

Park Hyun Soo (32) has been in the sales department

for only few months, but was able to increase sale

with the help of Mr. Huh. He says he wants to be like Mr. Huh

who asks and helps people in need of help.