Our school’s Director of Academic Affairs, Mr. Cho, is an expert at mediation.   The Director’s position requires one to be responsible for all administrative affairs and manage the relationships between the teachers, principal, and vice principal, as well as oversee the overall atmosphere of the school. Opinions often clash at school, just like any other workplace.   In addition to guiding students, there are demands and tasks handed down from the local education office and the Ministry of Education, and taking into account the opinions of nearly fifty teachers and 30 classes of students, parents of students and making a compromising solution is no easy task.   In particular, when there are instances of school violence, sometimes the parents’ involvement in the matter turns into bigger fights.

However, Director Cho was always able to turn those situations around and calm everyone down. It took less than five minutes for him to advise parents and meet with students to coolly counsel and coach them.

After working with Director Cho for over two years ago, I began to wonder how he was able to pacify people’s minds so well, so one day I approached and asked him.

Director Cho answered he had been practicing Maum Meditation for over three years.   Every year he was Director of School Affairs, Director of Students, or pursued research, and also was a skilled teacher in his subject, but the constant focus on promotion caused Director Cho to become removed from his students. As he realized this he asked himself “What am I doing? How am I living” and began to feel extreme pessimism. It was then when he received a notice for a Maum Meditation Teacher’s Program and began Maum Meditation.

As he persistently emptied his mind, he began to understand people with the heart, not the head, and as he found this freedom he found it easy to mediate difficult situations.

As time passed, the changes in Director Cho were even more noticeable.   His countenance was bright, voice confident, and his cheeriness could lead any atmosphere.   And thanks to Director Cho’s suggestion, I, too, attended the Maum Meditation Teacher’s program last winter break.

In one week I learned, for the first time in my life, the way to empty the mind.   The method was easy and simple enough for seventy, eighty year old grandmothers as well as children to practice, and immediately my mind became more at ease.

I was able to reflect deeply on my twenty-five years of life as a teacher.   Instead of placing myself in my students’ shoes, my feelings, my thoughts always came first.   I realized that all this time I had stored the impression of trouble-making students and had greeted with prejudice new students with similar attitudes. I had self-created this stress. I repented as I imagined how hard it must have been for my students.

After I finished the program and returned to school, I was free from the stored-up prejudices and stereotypes and was able to view my students from a completely new perspective.   Teaching students became easier and because students felt more comfortable with me, the synergetic effect caused the overall stress in the class to decrease. Starting this semester I start each morning with twenty minutes of emptying the mind. I do this with the desire that school life be more enjoyable for these middle school students, who have so much school work and are sensitive due to adolescence.

This year, Director Cho was chosen to be Director for an unprecedented third year in a row.   Always a “yes man”, with his dependable ability to liven the atmosphere and his characteristic sense of humor, I look forward to Director Cho creating a thoughtful school with his big and humble mind. 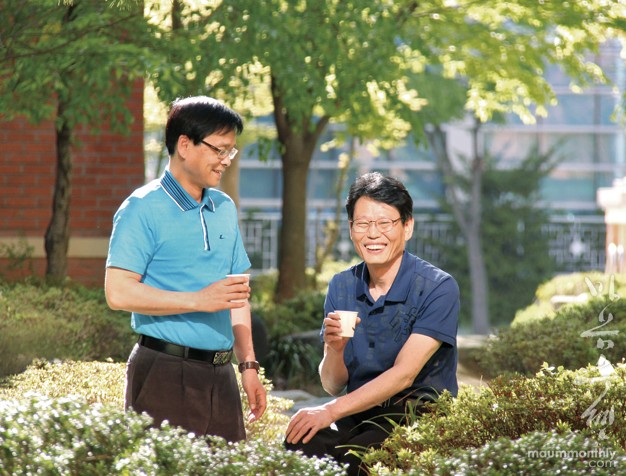