had been living with hard times due to the problems with his family and job when suddenly his wife passed away.

When he was sinking deeply into loneliness and sorrow, he encountered Maum Meditation.

As he meditated, he came to see the cause of why he was living in agony.

He said he recovered hope in life by completely escaping from his own mind world.

Here is the happy story of Mr. Lee, who now says

“I am happy whenever and wherever I am as I have found my original mind.”

My job is building ships. A ship passes through many processes in the course of production, and my role is to inspect the quality of the vessel in pre- and post-painting.

In Geo-je Island, there are vessels from many countries, not only from South Korea but also from overseas, such as Greece and Great Britain. Ship owners from each country come to supervise the process. Car owners buy a complete, finished product. But ship owners oversee the whole process from construction to the final stages. The ship owners hire the inspectors for electricity, electronics, engines, exteriors, interiors and painting to inspect the ship and make sure it is being well built. Our company provides the technical advice; but most of all, it is especially important to mediate between the ship owners and the shipyards.

I first came to know about Maum Meditation at a subcontractor’s office that I often visited. The atmosphere in the office was very good. I could see the employees working their hardest, no matter if the boss was present or not. It was quite different from other companies I visited. I often felt they were good-natured and sometimes even envied them. After a while, I found out that the boss was practicing Maum Meditation.

As I had a lot of stress at that time, I just started the meditation. What made me feel the worst was my wife’s condition; she was seriously ill. Why couldn’t I have done my best when she was healthy? On one of those days when I was overwhelmed with belated regrets, my wife passed away. The futility of life that I felt as I said goodbye to my wife gave me a feeling of desperation, and I had a guilty conscience that I could not really understand even her, the person who was the closest to me. That I had lived through hardships for my family was also merely a thought that I had held onto only for my own sake. During my meditations I could not help but throw away everything, even that which was buried at the bottom of my mind. Everything was simply because I had lived so wrongfully. I saw that everything about me was pretentious, self-centered and selfish. That’s why I so desperately threw everything away.

When I was in elementary school my grandparents passed away, and I was filled with futility because I realized that just living a life did not have much meaning. Death was the biggest enigma that I ever wanted to solve, but there was no way to solve it; and eventually I quit trying. I vaguely set a life goal of being happy and comfortable when my time came to pass away. Although I strived to reach that goal, the outcome of my life was opposite of my will for my life, and I wanted to escape from the life I had.

While meditating, I found a lot of inferiority and guilty conscience inside me. I was the eldest of the four siblings, yet the mind that I could not make my family safe and secure remained deeply rooted in my mind. As the eldest son I was supposed to help support my mother on behalf of my father, who had passed away at an early age. Even though I was well aware of my duty, in reality I just did what I wanted to and regretted it afterwards. And I treated my wife the same way.

I just saw myself as being so small and immature because I had not done one thing in my life properly. All those things had remained within me as minds and became my guilty conscience. I had never sincerely coped with those things, so I hid behind an unchanging face. You cannot imagine how ashamed I was. As I threw away those minds the enigma and my curiosity about death was solved. Before Maum Meditation I thought that death was when the body dies. However, at the very moment I realized the originally existing universe mind is me and not my body, I overcame my fear of death. So, for the first time with a calm conscience, I could truly let go of my wife. I felt as though she actually left me, having given me the answer to my questions. Although she has taken off her body, I believe that we can be together forever. If I hadn’t done Maum Meditation, I would have been unable to function properly in my life. Fortunately, as I continued to throw away my mind I overcame my agony and my work life became good as well.

For me, Maum Meditation is truly a salvation. Before, living was just like hell. Without the reason and purpose of living, I just lived in lonely empty solitude; feeling as if the routine would be endlessly repeated. As soon as I found Maum Meditation, my life, my mind, has changed.

Stress is ultimately the mind world that you have made. I guess I was able to continue to meditate because I knew that to the extent I discarded my mind I could become freer and happier. The best part of finding Maum Meditation is that I have come to have a purpose and hope for life, and the faith that I could do anything cheerfully and joyfully when I completely escaped from the world of my mind. I have seen the light that there is a method, and that method is in Maum Meditation.

Stress is ultimately the mind world that you have made. I guess I was able to continue to meditate because I knew that to the extent I discarded my mind I could become freer and happier. The best part of finding Maum Meditation is that I have come to have a purpose and hope for life, and the faith that I could do anything cheerfully and joyfully when I completely escaped from the world of my mind. I have seen the light that there is a method, and that method is in Maum Meditation.

There are 25 people working on our team, and there had been many conflicts just because everyone had differing viewpoints. I clenched my teeth and tried to live positively. 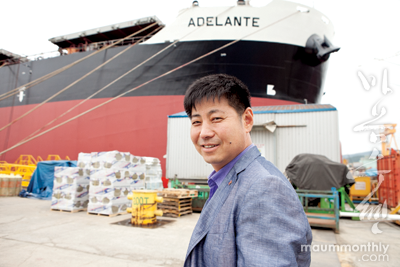 I endured it, trying to believe that everything was my fault and trying to do better. But when things went too far and I reached my limit I would explode!

I talked a lot about Maum Meditation to my coworkers. Six of them began doing the meditation, and the workplace ambience has become a lot better ever since. Now I never get stressed out from my coworkers. This may be because when I see others I see the value of them, not their appearance or style. Most of all, I realized while meditating how precious the people are who are around me every moment. I came to see the seed of life that is within them and by which we can eternally live together. Every single person is precious, so instead of criticizing and blaming others I earnestly appreciate and care about all of them.

Because it is my job to inspect the vessels I especially tend to habitually look for what is bad. I used to have the habit of pointing out people’s faults to them. I would first judge them as to whether they were right or wrong. But now, after I listen to their opinions, and accept their viewpoint, I tell them my opinions. In that way, problems are easily solved and everyone enjoys working together.

“Living together” and “harmony” are words that are often tossed about; and many organizations attempt to introduce these concepts into their working environment. However, they find it almost impossible to put them into action. Only when people throw away their minds will they come to know that it happens naturally, not by forcing people to make it happen.

Maum Meditation is the practice that makes you really know about yourself and also about Truth. As people spend their time merely to work for financial stability, they don’t usually think about the reason and purpose of their living. I really hope they give themselves time to think about it. I truly feel sorry when seeing others feeling painful in their mind world, because I suffered pain from there also. We often say that we are looking for the blue bird of happiness, but I insist that everyone should be looking for it inside their mind rather than looking outside of themselves. I sincerely hope that everyone will come to know what the mind is, and can escape from the mind, for then everyone can live happily forever.